“Geoff is like a modern day Johnny Appleseed, spreading his message far and wide, only working with bubble instead of apple seed, and children’s souls instead of earth.” –Dr. Thomas Hudson 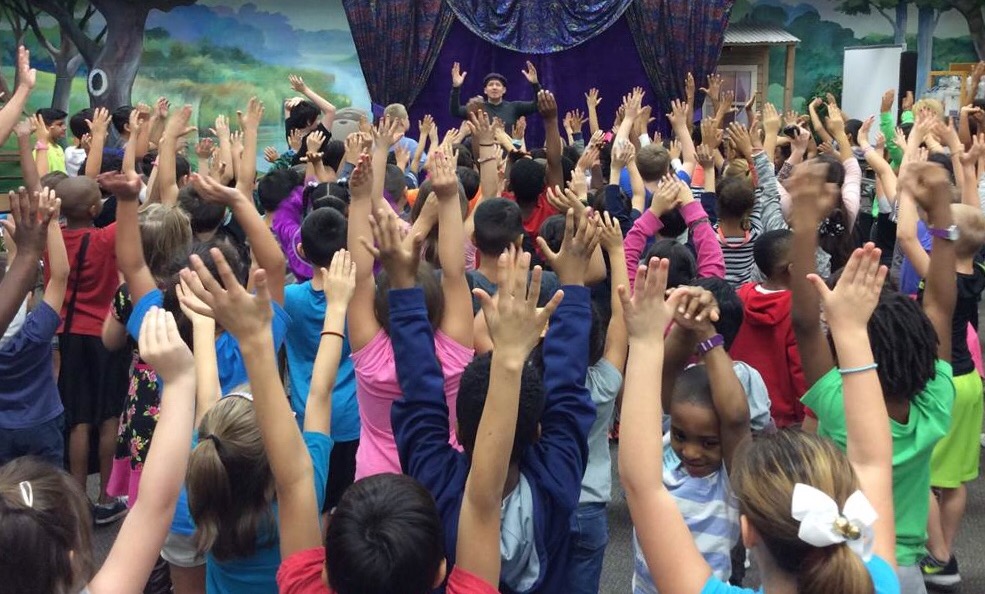 Geoff’s inspirational Bubble Wonders show ends with him asking, “What’s your dream? What impossible things are you going to do? What’s your Square Bubble?”

The Square Bubble is both a symbol and a metaphor for our elusive hopes and dreams.

During the presentation Geoff talks about his dream of making a Square Bubble and how he met opposition and skepticism from those who did not share his vision. He talks about the importance of persistence and believing in oneself, in taking action, and, ultimately, following your dream.

In his Youth Mentoring program Geoff takes kids through a step by step process to focus in on what’s most important to them, what qualities would make up their perfect life. Even though they might be young, children often already know exactly what they’re here to do. What they need is someone to champion that knowledge. That’s where Geoff comes in.

Through a series of lectures and experiential lessons Geoff gives kids the chance to really dive deep into the most important questions of Life: “Who am I and what do I want to do with my life?”

Chances are the answer to these questions will change throughout life but the most important factor is learning how to ask and answer those questions so they can be reviewed and reevaluated during turning points over a lifetime.

For more info about one on one and group Youth Mentoring programs please contact Geoff through this website.

At least that’s what the Bubble Man says.

The kids all believe him, of course,

And why shouldn’t they.

Anyone who blows bubbles

For a living wouldn’t lie.

It’s only the rest of us who don’t believe him,

You know, those of us who know better.

It’s a nice thing to tell kids, I suppose.

I guess there’s no harm in it.

I mean, we tell them about Santa Claus, don’t we?

And they all eventually find out it’s a scam,

But don’t seem any worse for wear,

So how is this any different?

It’s just another pleasant fantasy for the kids,

One more little white lie for their amusement,

Until they grow up and find out

The world doesn’t work that way.

But wait a minute. I happened to be

Reading the Scriptures the other day,

And it turns out that

God agrees with the Bubble Man.

All things are possible with God, it clearly says,

Right there in black and white.

What?! God, the Bubble Guy, and the kids

All agree, and we don’t?

Maybe we’re the ones

Who’ve been listening to fairy tales,

You know, like, the world is a predictable place,

Where you get by on hard work, and then you die.

I think I like the Bubble Man’s fairy tales

A lot better than the ones I’ve been listening to.

I have to admit that I briefly entertained the thought

That this Bubble Man should get a real job,

You know, like the rest of us have to.

A real job in the real world.

But now I think he should

And that just maybe, his job

Is a lot more real than most.

He is telling our kids things

We ought to be telling them, after all,

Spreading his message far and wide,

Only working with bubbles instead of apple seed,

And children’s souls, instead of earth.

The seeds seem small now, but only because

It’s the next generation that will bear the fruit.

For the one who believes that

Life is an adventure beyond

What most of us can imagine.

And that’s good enough for me.

I wonder if he’s too busy

To do my next birthday party! 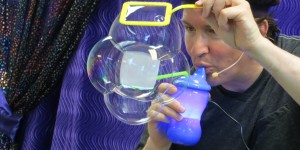